EPIC were so proud to help with such a fantastic project! Founder Andy Cleeves has been helping the players with their fitness and conditioning and was present on game day to warm the players up ahead of the big match. EPIC also managed to raise over £350 towards the total charity pot!

Below is a couple of posts from the Impact Trojans official Facebook Fan Page to highlight how the final event went and what it means to everyone involved:

The feedback we have received since our charity match day last Saturday has been amazing! Below is comments from Clare Toller and this just put into words why we do it!

“Wow what a fantastic day we all had yesterday. 30 guys who have only been training for 10 weeks came together and played as a fantastic team. You could see the sheer determination and pride on each one of your faces and that most definitely paid off. Excellent match lads. But I would like to say a very special thank you to Geraint ‘Gursh’ Nicholas, Bob and Olly for giving us something we would never have been able experience and never dreamed would be possible. We got to see our son’s name on the back of a shirt and be part of a rugby match. To see his name proudly worn and be part of a great team lining up at the start brought me to tears. And to hear my nephews cheer on Grayson at the sidelines was something so magical. I never thought something so simple as a name on a shirt would mean so much and it’s because of you guys that we got another very special memory to add to our pot. Thank you so much once again for all that you have done xxx “

So the figure you have all been waiting for is £23,600 raised in 10 weeks by the Impact Charity Rugby Team ! Huge effort both on and off the pitch by the guys.

Yesterday’s match day was watched by over 1000 people and the support was amazing! Huge thanks to all our sponsors, players, fans, coaches and Bristol Barbarians rugby club for your continued support because without you guys this would not be possible.

This money will really make a difference to Jessie May Trust and Children’s Hospice South West and to raise £23,600 for these two great local children’s charities is unbelievable. 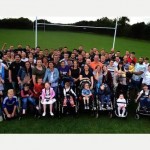