We are pleased to announce that our weekly timetable is expanding. For those of you on our GOLD membership there is a new class starting up in Winterbourne on April 22nd.

This class is for GOLD members only, if you would like to attend this class please see your instructor prior to training at Winterbourne and your membership can be upgraded.

More information will be released at the beginning of APRIL

EPIC Day out at the CIMAC

Yesterday EPIC took a squad of fighters to the CIMAC adidas open at Windsor and got some great results.

There were some tough divisions in this point-accumulation league, where we saw gold, silver and bronze medals won all over the place.

With Andy Gill, Kam Doyle and of course Andy Cleeves coaching- the fighters had experience behind them.

Teia Doyle, Grace Chandler, Dylan Hunt and Matt Roberts also competed but were unlucky not to make the podium.

The support from the epic members who travelled was, as usual, the loudest there. We are proud of the clubs achievements on and off the mats this year so far and our continued success.

END_OF_DOCUMENT_TOKEN_TO_BE_REPLACED

Sunday 13th March saw EPIC martial arts headed to the KWON in Birmingham. We had a large following and took up around a quarter of the stand at the back of the arena.

A big medal haul came back to the south west with us as we dominated the day. A massive congratulations to all whom travelled up to fight, including those who had their first national competition.

A well done to those who narrowly missed out on the podium:
Daisy Humphreys and Jordan Sambells.

Also best wishes for recovery to Molly Hershaw who was injured 5 seconds into her fight and a mention to Sadie Worland who travelled up but didn’t get to fight due to nobody else representing in her category.

Team EPIC took just short of 50 people to the Irish capital to be a part of the worlds biggest kickboxing tournament.

2016’s IRISH OPEN had 4126 competitors! The arena is huge at the Citywest Hotel, with upper tiered seating holding around a capacity of 2000 people it is a massive place. Although this number wasn’t anywhere near full at any point, the atmosphere from above was amazing and really helped our fighters on the big stage.

A massive thank you to the parents of the younger generation for the commitment and great atmosphere created when our warriors fought.

A further well done to all of our competitors for making it onto the tatami’s! There were some very good moments from the championship: The King moment was when Kam Doyle (15) won the 16-18 year category, becoming Irish Open champion after 5 years of trying.

Next year the capacity of competitors is being capped at 4000 so we will announce when tickets go on sale and that will be time to get them! 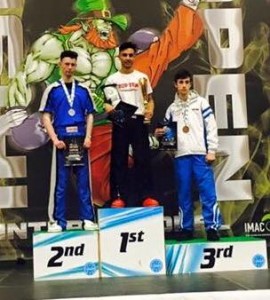