Welcome to week 5 of coaches corner, the exclusive weekly release feature of EPIC Martial Arts. This feature will cover all of our coaches, junior coaching team, admin and those who make the club tick.

We’ve so far heard from Ben Gill, current WAKO world champion Kam Doyle, Matt Roberts and the lovely Jane Lewis in the opening 4 weeks. Now it’s time for someone else to be under the spotlight.

Who is it? Well it’s none other than our lovely junior coach Olivia Davies. Liv is one of the coaching team at Portishead on a Tuesday and trains on a Monday night, Tuesday night and when she can after recovering from a bad injury and operation.

Want to know more about ‘the Major’?

Q: What do you think the most important aspect of martial arts training is?
Liv: I think discipline has to be the most important for me. For many children it can help them with behaviour in school and at home and also respect for people like teachers and parents and even friends.

Q: How long have you trained in martial arts for and what styles do you do?
Liv: I have been training for nearly 9 years in which I have done point and continuous, definitely favour points. Although I have to take a year out due to my knee injury.

Q: If you had to have a dance off with one member of epic who would it be and why?
Liv: Steve Cruse would definitely have to be my choice, he’s got the moves!!

Q: Would you win that dance off?
Liv: definitely not me haha

Q: How many times do you train in a week?
Liv: I try to train twice a week because with work, driving lessons and homework I have to squeeze everything in however I would prefer to train at least 3 times a week

Q: Of the letters in EPiC’s name which stand for Energy, Positivity, Inspiration and Confidence, which one resonates with you most? Why?
Liv: um, it’s got to be inspiration for me. The role models that our senior coaches set inspire me along with many of the students who look up to all of our EPiC coaches including junior and assistants.

Q: Who do you least like sparring and why?
Liv: I think I’d have to say Kam, he’s so good and reads people so easily but he makes you really think about what you’re doing which is so good!

Q: What is your standout EPiC moment of 2016?
Liv: my standout moment has to be quite recently at Ed Byrne’s interclub when I returned to fighting, after nearly 2 years out, and fought a challenging round robin drawing in 1st place and then getting second overall.

Q: If you were to take 3 members of EPIC on holiday who would it be and why?
Liv: I would definitely have to say Molly, Carmen and Lady G- Grainne that would be so fun!!

Q: Which is a better martial art: kickboxing or Kung fu?
Liv: this is difficult as I believe both give different skills. Kickboxing is good for sparring skills and techniques and Kung fu gives a more traditional approach to martial arts. For me, I will always feel most comfortable with Kung fu syllabus as that’s what I’ve graded in.

Q: What are your aspirations and goals for 2017?
Liv: Next year I want to be back competing on the circuit and would like to go to an international competition too.

Q: Finally: if you could win one tournament outside of the worlds or euros which would it be?
Liv: this would definitely have to be the Irish open, winning the biggest competition would be a huge achievement for me and a dream I want to one day come true.

Liv is looking forward to 2017 and the challenges it will bring. All the coaches are looking forward to her getting back to sharpness and what she will do on the circuit next year. Along with the fighting she is a budding young coach who revels in the challenge of leading the younger children to success not only in martial arts but also setting an example to follow as they grow into successful and bountiful adults. 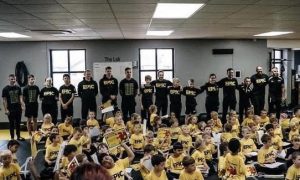 This past weekend saw the first EPiC Grading show since March 2020 at EPiC Martial Arts and Fitness HQ. It was an amazing weekend, where 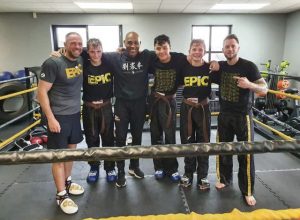 Last weekend saw the first EPiC Higher gradings for over 18 months. Brislington students Fin, Jed & Ollie have patiently waited throughout the lockdowns to