It was an incredibly well organised and well run event, starting on time and running to schedule.

There were some excellent performances on the day, Head Coach, Andy Cleeves said ‘Wolfman Sean McDonald and Katie Williams’s performances really stood out, for their excellent use of technique and listening to instruction’.

In the pee wee 9 and under categories, Epic certainly shone, winning 3 out of 4 of the golds on offer. Harvey Pollard won the -24kg category, with some really hard fought performances and Sean McDonald won both the -32kg and +32kg categories. Teia Doyle and Ewan Thain also did very well in the pee wee sections.

A special mention also goes to Evie Jones, who made the big leap up from Interclub competitions to her first National competition, where she won a well deserved silver medal in the rookie girls, -46kg category.

This was a great competition to support and be a part of from the beginning, the next GB Grandslam will be on Sunday 9 June 2019. 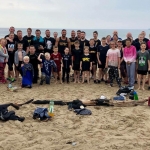 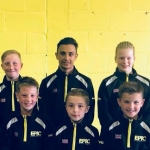