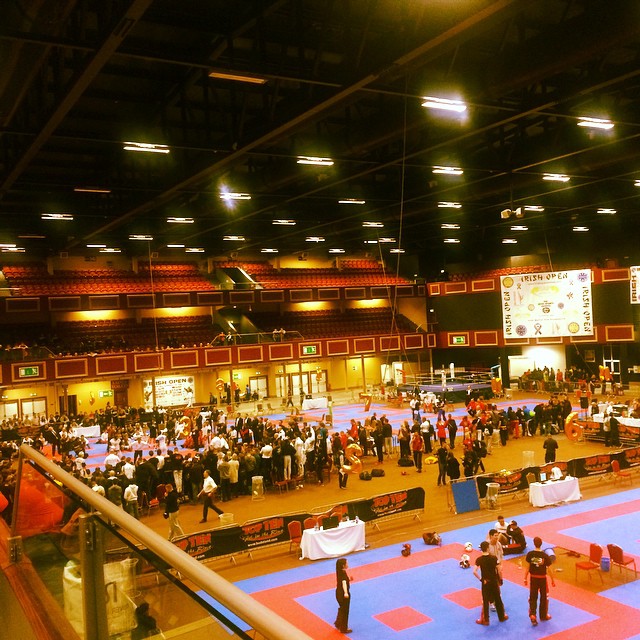 As part of TEAM Bristol, EPIC’s competitors have had a really busy start to 2015, taking part in a number of quality competitions but the Irish Open took things to another level for them as it is quite simply the biggest event in Europe and the biggest event in the WAKO calendar. To put it in perspective, the 2014 Irish Open  saw 37 Countries attend with over 3,500 competitors and 2015 proved even bigger with 17 7×7 meter matted areas, two 8 x 8 matted areas for forms  and one/two rings. Quite simply it has become the most prestigious fighting tournament in Europe if not the world. Veteran star Gio Marchese summed up the challenge facing any competitor when they enter the Irish Open-“18 fighters in my Full contact weight class and 62 fighters in my Continuous Weight Class. Over 4000 competitors from all over the world! Wow, 3 days of battles in the ring and on the mats. This is why the Irish Open is so prestigious, if you win your category you really are World Class in this combat sport!”

Fighters from EPIC that fought for TEAM Bristol were Kam, Harrison and Ellie Doyle, Rio Williams, Hayden Challenger, Ben Davies, Ishana Moores and Gio Marchese and they did everyone proud by securing medals in the most heavily-populated and competitive tournament they will attend all year. Ben Davies fought in his first Irish Open and at 16 stepped up into the Intermediate Mens under 70kg. He really stepped up to the challenge and from a category of 42 he came away with a silver after 5 tough fights, a remarkable achievement. It was an achievement matched by Ishana Moores who won silver in the Junior women 16-18 years -50kg category. She turned 16 in January so only recently moved up to the 16-18 age category. At the Irish Open there were There were 30 competitors in her category, so to take silver so early in her career in this category was a superb accomplishment. “I won my fights against a Hungarian girl in the 1st round, an Italian girl in the 2nd round, a girl from the Netherlands in the quarter finals and then another Italian girl in the semi-finals. I lost against a girl from Belgium in the final.” Rio Williams showed the heart that epitomises the team spirit of this group of fighters as he fought in the advanced -32kg which held over 60+ boys in his category with very strong fighters from all over the world. Undaunted, Rio showed his own strength of mind throughout the category, scoring a number of 2 point head kicks and even stopping a boys with 10 points to 0 in the first 40 seconds of the fight! He then went on to the semi-finals which went to extra time, just losing out by a point to get a well- deserved and thoroughly earned 3rd place medal. Kameron Doyle also displayed his consistent fighting qualities, medalling once again in two categories, taking 3rd in the -advance cadet 13-15 points division and 2nd in the advance cadet 13-15 -52kg points division.  Kam had about 8 fights in _57, displaying his strongest technique ever, the last fight going to sudden death, where Kam was unlucky to see the referee give the decision to his opponent.

As mentioned this was a huge tournament of the highest standards and was also Hayden Challenger’s first trip to the biggest competition in Europe. It proved an eye-opener but great experience for Hayden who was first drawn with an Irish lad, who pulled out, then a German lad with whom he had a great fight, narrowly missing out in the last 3 seconds. He then went to his next section losing out to the eventual winner and the trip proved a little ambitious given the age of Hayden compared to the competition in his divisions but he can’t wait until the next one! Harrison and Ellie Doyle both fought well but didn’t place as they too were in very tough divisions but benefited enormously from the experience.

Gio Marchese was in competition over the full three days across all disciplines, a remarkable achievement given that he had only just recovered from a serious injury and he was to get his reward with a hard-earned 3rd place medal in the full contact -63kg division. Gio summed up the feeling of the whole team after an immense tournament experience- “Bronze at the Irish Open. Wicked weekend of competing, lots of bouts, had some good dust ups against some world class opposition, gave some and took some, happy days!”