Marchese marches on! Another K-1 win for EPIC instructor despite injury. 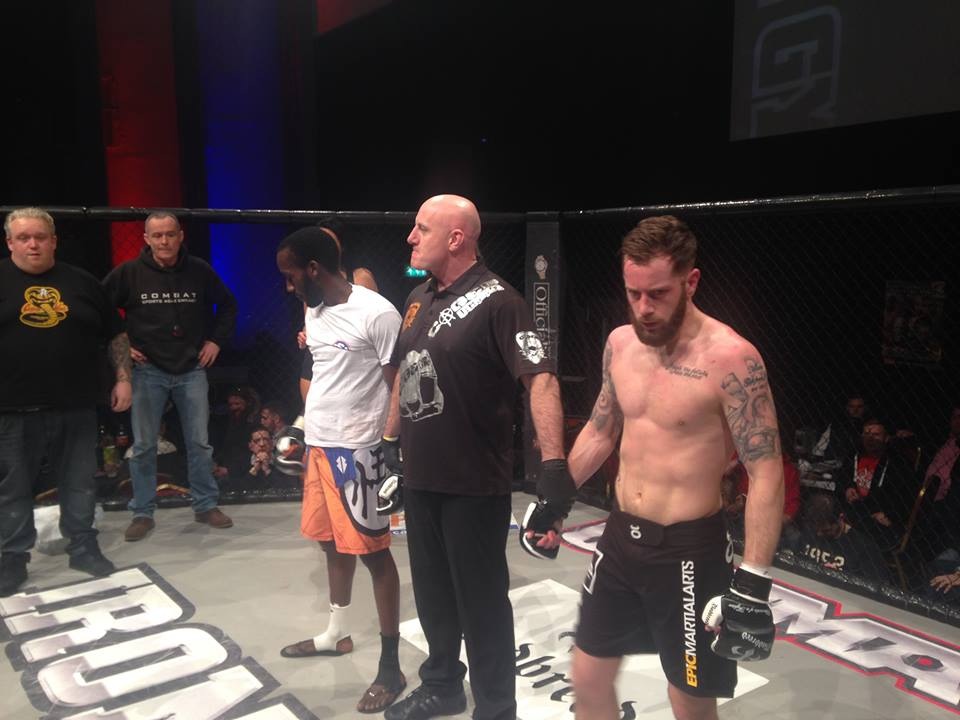 EPIC instructor Gio Marchese continued to prove his multi-discipline excellence by winning his second professional K-1 bout on UCMMA 42 at London’s Troxy in the East End over 3 x 3min rounds. His opponent was the dangerous and durable Chris Garnett, nicknamed ‘Granite Chin’ and a solid Muay Thai and boxing exponent. This would have been a tough fight under any circumstances but Gio suffered a serious injury a fortnight before the bout in the final of the prestigious WON Tournament. On his way to gold, Gio executed a trademark axe-kick “which got caught on my opponents shoulder and when he shrugged my foot off him it pulled through my groin and I was in overwhelming pain.”

It was a potentially shattering blow for Gio, who was using the tournament as a final warm-up for the K-1 bout, having been in an intense training camp since early December and throughout the Christmas festivities.  “My first thoughts were that it was a bad tear and I would no longer be able to fight in London but the physio’s at Optimus who are housed at the Hub gym, Portishead were great and they told me it was actually not my groin but an Adductor that was badly strained. So with the help from Optimus sports physio and the specialist help I received from the ‘Rehab Room Cryotherapy’, who are housed at David Lloyd in Westbury Park, I managed to get mobile again very quickly.” With the fight still on Gio had to adapt his training regime, taking kicks out of the equation and focussing more on boxing, core conditioning and intense cardio. Gio credits EPIC Coach Andy Cleeves with the mind-set that sees him always remain positive and able to maintain a strong outlook even when injured in this way with such a tough fight coming up. It also meant developing and sticking to a very precise game-plan. “To go into the cage and utilise my movement. Our kickboxing style is all about pace, angles, movement, footwork, in and out, precision attacks maintaining correct distance and timing. Chris Garnett my opponent was known for his grounded Thai Style, good boxing combos and his solid leg kicks, so I knew this was not a guy I wanted to stand and trade with or end up in a brawl. The game plan was to be the clever, smarter fighter.” Before the fight Gio executed an extensive mobilisation and stretch routine with his corner man Chris Djaelini. They then taped and strapped the injury and had a good sweat out on the pads. Gio had also brought a strong following to London, the ‘West Country Barmy Army’ and he credits his fans with being the loudest and proudest supporters by far on the night! “I’m so thankful to each and every one of them!”

The opening round confirmed Gio’s worst fears as Chris opened with leg kicks which straight away aggravated Gio’s injury but also quickly reminded him to get up on his toes. Chris pressed and Gio moved, exchanging blows with Gio the cleaner of the two. A solid Marchese side-kick to the body saw Garnett hit the canvass, ensuring Gio edged that round. The 2nd proved scrappy, with Garnett increasing the pressure and landing more leg kicks. For his part Gio had some success with push kicks, both men exchanging punches and making for a very even round and a close fight after two hard rounds.

In the 3rd round Gio was told by his corner (Andy and Chris) that it was time to go up through the gears, so Gio went out with more pace and started using a blitz style cross which was becoming very effective and he landed 5 or 6 solid right hands. “I felt him tiring and slowing up and because my injury was holding tight I though now was the right time to go for head kicks. I threw an axe kick and boom, it landed square between his eyes, I felt no pain, so was buzzing with reassurance that I could head kick!” With this new found confidence in the stability of the injury Gio began to open up with the high kicks and connected directly with Garnett’s jaw, rocking him, and for a moment Gio thought the stoppage win was his but Garnett lived up to his ‘granite’ nickname and survived to the bell. This late assault saw Gio take the win in a very tough bout indeed, reflected in the judges giving a split-decision 2-1 in Gio’s favour. The fact that Gio competed at all is testament to his and his team’s true warrior spirit and determination and Gio has proved once again that he can adapt to various disciplines and still emerge victorious. This, however, given the traumatic build-up and the tough nature of his opponent, surely has to go down as one of the talented Instructor’s most satisfying victories and a night for his faithful fans to truly remember. Well done Gio from everyone at EPIC!