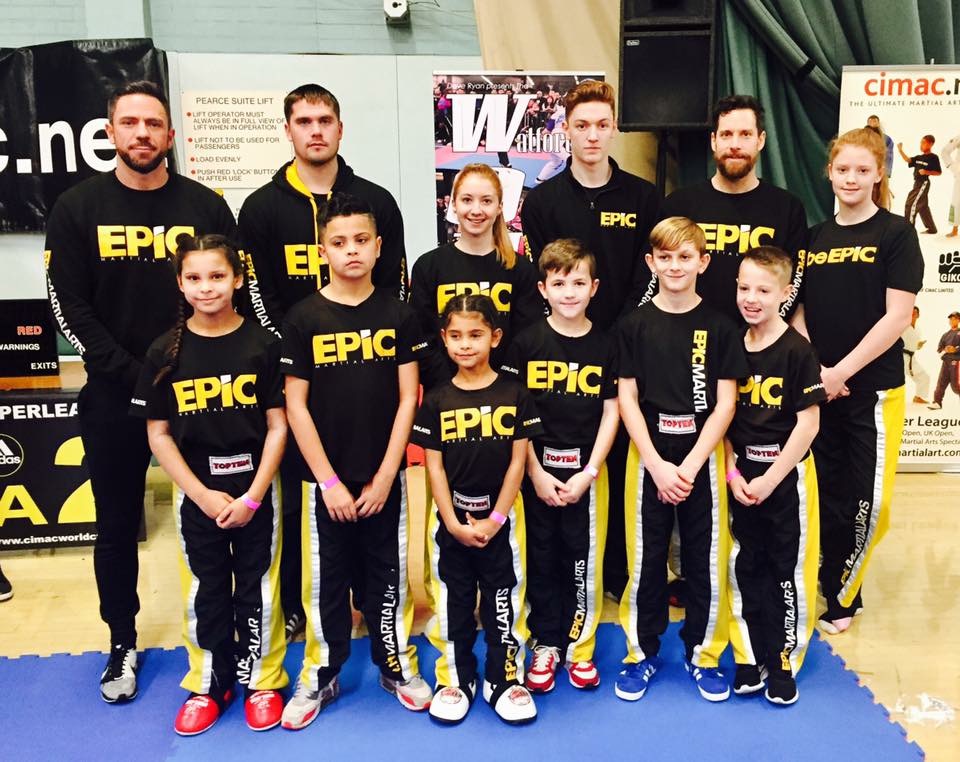 On a day that had several long speeches, 10 challenge matches, 73 divisions, an awards ceremony and a final round-up of goodbyes for the year on the fight circuit, team EPiC continued their success on the tatami.

November has seen the two final tatami competitions of the year and leaves only total valour 3 remaining this coming Saturday. Tickets are still available for that event too, so to see team EPiC’s captain and world champion Kameron Doyle in action then make sure you get one.

The team took 12 competitiors and 2 coaches to Maidenhead for the conclusion of the CIMAC SUPERLEAGUE 2016. Between them they took 5 golds, 4 silvers and 5 bronze medals on the day which means 14 medals which adds to our 65 medals won at the BBBA competition last weekend. Meaning the team has taken 79 medals between 47 competitors in a week!

5 of our team came away as ‘grand champions’ of their divisions this year and they are Harvey Tyler (x2), Ellie Doyle, Teia Doyle and Matt Roberts.

Here is a breakdown of our 12 warriors on the day:

Harvey Tyler took a silver and two bronzes on a day where he claimed two superleague grand champion plaques. He fought well and was unlucky not to have come away from more in his points divisions. He lost out in continuous to the talented Brandon Swaby in light con but claimed a bronze by beating team mate George Sherlock in the playoff fight for 3rd.

George Sherlock had a frustrating day being drawn against teammate Harvey Tyler twice and had tough draws in his other categories however he did win himself a well-earned bronze medal to make the trip home a little sweeter. He showed a maturity on the mats and took defeats, when they came, gracefully.

Ellie Doyle had a successful day on the mats. She opened her account for the day by winning a gold in her first points category before suffering defeat to Wolfpack rival Poppy Giles. However she bounced back to beat tough SAS fighter Ellie Harvey 2-0 over two 1.5 minute rounds to win her challenge match and subsequently took a plaque in her first points category as grand champion 2016.

Jordan Sambells powered his way through two very tough opponents to win his points category. He took apart his first opponent with fierce and precise kicking to score two headkicks on the way to a 7-4 victory. He then backed this up in the final by beating talented SAS fighter Sam Leggett in the final using his fast-becoming trademark style of snake-leg. The chamber rose time and time again to push his opponent onto the back foot and using his long reach to take single points in abundance.

Sadie Worland recovered from a slow start against her first opponent to claim gold in her category. A fantastic performance in her final saw a 9-2 scoreline which lead to her trophy. A good return to action after illness and a great platform to build on for 2017!

Justin Worland showed perhaps his most skilful display yet as he used a push and pull movement to draw in his opponents before mixing his techniques up between blitz and side kicks to pave his way into the final. He dispatched SAS’s Sam Leggetts in style in the semi finals before meeting an awkward fighter in the final whom he narrowly lost out to, but a silver medal for his gallant efforts on the day.

Ben Davies opened his account at the CIMAC against selected GB fighter Nathan Armstrong. Ben recovered from 4-1 down to take the fight to an extra 30 seconds at 5-5. The extra 30 seconds started off with Nathan nicking a point off Ben with a quick counter and then Ben pulled out of a technique which was punished with 8 seconds remaining. Davies pulled a point back with a quick blitz off the mark but was unable to draw the last point to force sudden death. He beat his opponent in the 3rd place fight off to claim a bronze.

Dylan Hunt ended his 2016 competition engagements with a silver medal from his continuous category in which he was required to fight back to back in the semi final and final. A difficult feat for any fighter, Dylan didn’t quite have the energy required in the final 30 seconds in which his opponent scored enough points and ultimately went on to win in a split decision.

Teia Doyle, our youngest fighter on the day at the tender age of 7, won her category after coming through 3 tough rounds. Pick of the fights was against wolfpacks Nyla Roberts which was close. She took her trophy and ultimately this meant she was the grand champion 2016 so she too took a plaque home.

Amy Kingscott has made a return to fighting after a long break with two competitions in 4 weeks. She backed up fighting at Bristol with a performance in the CIMAC. In a division with Ishana Moores and Nesta Baxter competing in, this was going always going to be tough. Amy stepped up and did her best but ultimately her first round opponent progressed to the next round.

Harrison Doyle took a silver and bronze to complete his tournament schedule for 2016. It’s been a mixed year on the mats for the younger male Doyle brother but he ended it strongly with two medals. He showed better control on the mats and kept the pressure up for the most part in his performances but ultimately fell just short of gold.

Mike ‘Super’ Cooper was deducted 9 points from his continuous fight before he even started for being late onto the tatami and ‘unprepared’. Despite both Matt Roberts and Andy Cleeves protesting this the decision stood. Cooper dominated his opponent throughout the fight and must have pulled it back to within one or two points but ultimately he didn’t do quite enough. He landed powerful combinations, solid body kicks and moved around the tatami’s well after a gap in competitions since the summer.

The club would like to thank all the families that have travelled with us and supported this years events and ask for one more rally of support behind Total Valour 3 on Saturday night, tickets are only £20 for a whole night of entertainment, with a bar and a friendly-fun atmosphere to accompany each and every bout that happens inside the ring.

For more information speak to Andy Cleeves or Matt Roberts.