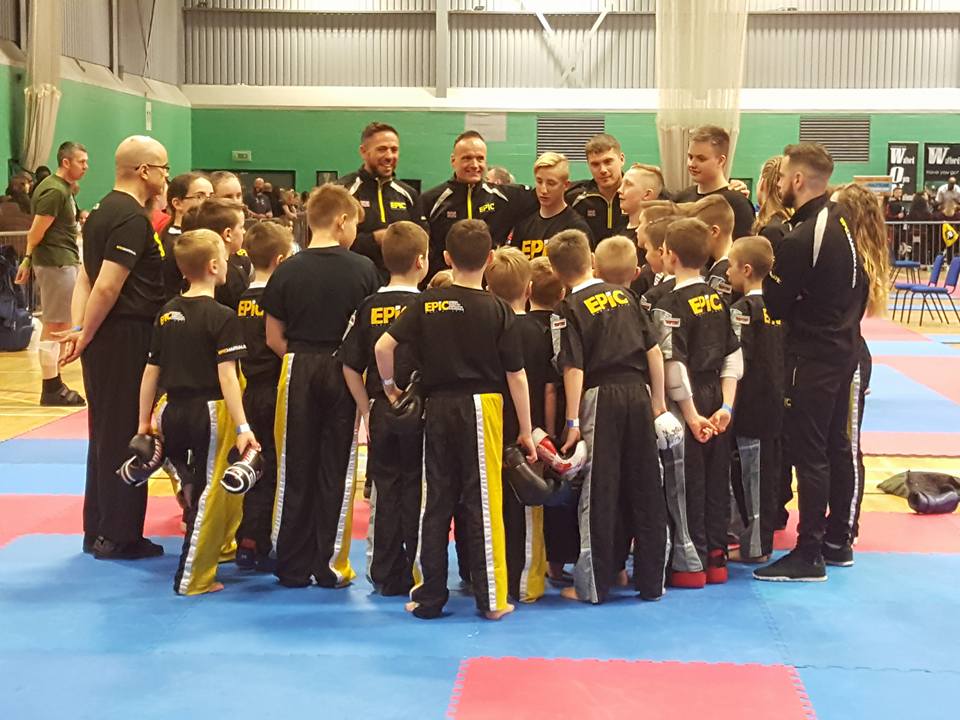 The team smashed the medal haul at the Watford Open Nationals! A strong team led by head coach Andy Cleeves along with coaches Andy Gill, Gio Marchese and Matt Roberts.

The latter coaches all competed with Gio claiming a gold in the -69kg advanced light continuous with a win over long-time rival David Higgins. Matt Roberts claimed a silver with two convincing victories before losing out to world champion Chris Aston by 8 points in the final. Andy Gill beat rival nemesis coach Peter Felix before losing out in the next round by 1 point!

Mike Andrews won a bronze in the -75kg novice points category with a hard fought semi final where he ultimately missed out on the semi finals with a 6-2 defeat.

Oliver Hiscutt lost by 2 points in the quarter finals as he fell just short of the podium fight, as did Dean Andrews after a energetic 6-1 victory in his opening fight, he fell 4-1 to a GB fighter who himself went on to have a nasty injury in the final. The club wish him a speedy recovery. Alex Fellender-Evans claimed 2 golds, one in the -28 and one in the -32kg points categories. His typical movement and counter fighting techniques were too much for his opponents to handle.

Rhiannon Bater stepped up to the advanced categories and was unlucky not to place, Harrison Dent earned a hard-fought bronze in the light continuous -51kg category. It was one of the fights of the day! Sean MacDonald claimed a bronze in the -28kg Points category in which he lost to team mate Alex Fellender-Evans.

Ewan Thain narrowly missed out on the podium twice with 2-1 defeats in both the -25kg points and -30kg points. Jess Andrews missed out in the -55kg Advanced points but picked up valuable experience against her main competitors. Summer Lonsdale picked up a bronze in her first major national tournament. She lost 7-5 in the semi finals but it was enough to land her on the podium!

Alisha Miles lost 4-2 in the -55kg and 8-1 in the -50kg to narrowly miss out on the medal placements and Ryan Chapman was even closer losing by 1 in his -28kg! The -32kg category was close but he couldn’t quite turn a deficit around to advance in that one.

Katie Williams took a bronze in the -60kg points losing 8-4 in the semi finals. She lost 4-0 to a GB fighter in the +60kg category. Ollie Lawler lost out narrowly in his -37kg categories. 4-3 in both of his fights as he came close to claiming silverware. Fin Cozens lost in the semi finals to take a bronze in his -42kg continuous category.

Connor Chapman was unlucky in his -42kg Advanced points category as he fought up a category for the first time. He also was very competitive in the -42 intermediate points section and gave his opponents a lot of issues with his lethal left leg but a harsh call as the referees missed a head kick on the buzzer meant that he missed out on a medal. Peter Lonsdale lost 4-2 in his advanced -37 category and he was agonisingly close in the -32 section as he lost 4-3 on the medal fight!

Dylan Hunt took a gold in -37kg Light Continuous category after pulling off the technique of the day with a spinning sweep! He also took a bronze in the -37kg advanced points.

Next up for team EPIC is the Karlovac Open in Croatia!