Epic has golden start to 2015 at the Kwon Grand Slam Series! 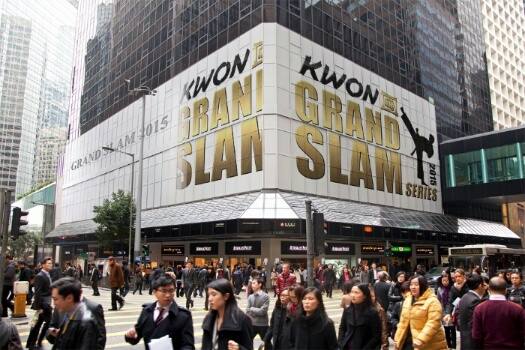 Sunday January 11th saw the first opportunity for EPIC Martial Arts students to test themselves in 2015 as the team travelled to North Solihull Sport Centre in Birmingham for the first event in the Kwon Grand Slam Series, the UK’s fastest growing Sport Martial Art circuit. Such is the growth in popularity of this event that pre-registration deadlines had to be extended due to the amount of entries. Given this level of entry, medals would have to be hard earned but Founder Andy Cleeves was more focussed on the students participating showing progress in their performance. “We are going to start the year as we mean to go on by showing heart, tactics, skill and desire. My focus is performance and progress and results will follow.”

On a day of fierce competition the EPIC Students did their Coaches proud and not only showed that desired improvement but brought back a solid haul of medals to set the standard for a busy year of competition.  Seven year old Hayden Challenger, who trains at Portishead and Henleaze with Andy Cleeves started the New Year with his first ever win in a major competition, 1st in the -125 continuous advanced Division. He followed this up with 2nd in the -125 novice continuous and 3rd in points -125 advanced, to cap an excellent day of competition.

Similarly another seven year old, Kairon Rowlands who trains at Bradley Stoke, Henleaze and Filton came 1st in his first major competition and his cat was -135 novice points (aged 8 and under). Showing that EPIC is developing real strength in depth amongst its youngest competitors eight year old Harry Rhodes, who also trains at Henleaze with Andy Cleeves took double gold with 1st place in the Boys 8 yrs and under -135 advanced points and 1st place in boys 8 yrs and under +20 kgs.

Zach Dallio, who trains at Henleaze was another golden eight year old as he came 1st in advanced -125cm and followed that up with a 2nd in advanced -135cm.  It also proved a very fruitful day for the Doyles who train in Henleaze and Redlands as Kam Doyle took double gold with wins in _51kg points advanced and  _51kg continuous, whilst Harrison Doyle took _30kg points advanced bronze and  _30kg continuous silver and young Teia Doyle took  _115cm 5/6 years bronze. Not a bad haul for a day out in Birmingham!

Also of note amongst the Juniors were the performances of Amy Kingscott, fourteen, who trains at Portishead, Henleaze and Filton as she came 2nd (Silver) in Girls age 9-15 -44kg Advance (Black Belt+) Points and Rio Williams who took -30kg advanced (silver).

In the adult divisions Gio Marchese continued his winning ways across a variety of disciplines by taking Gold in the Continuous , whilst Mathiue Jones took the same colour medal in the points with Imogen Proctor picking up silver And Carmen Jones bronze, also in the points divisions.

After a great day’s competition Coach Andy Gill had this to say about the performances of all involved- “there is no greater feeling of pride as a coach, than seeing students who train for weeks and years achieve their first win or first medal in a competition; for Kairon Rowlands, this was such an occasion, his smile lasted days and mine is still there, a truly well deserved 1st place. Harvey Tyler continues to go from strength to strength, his commitment and hard work is definitely paying off and he is a credit to his parents and a great asset to Epic Martial Arts. For Finlay Hayes, knowone deserves success as much as him, he trains and tries so hard and whilst on the weekend the medals just escaped him, but I have no doubt he will win major events in 2015.  As a coach, I couldn’t be prouder of all of the students from Epic Martial Arts”